Neuropharmagen® helps to provide optimal treatment to every patient suffering from depression or other psychiatric disorders.

Neuropharmagen® allows using the patient’s genetic information along with other clinical indicators and environmental factors to select the most appropriate pharmacological treatment in a particular case, achieving maximum therapeutic effectiveness and minimizing adverse effects. 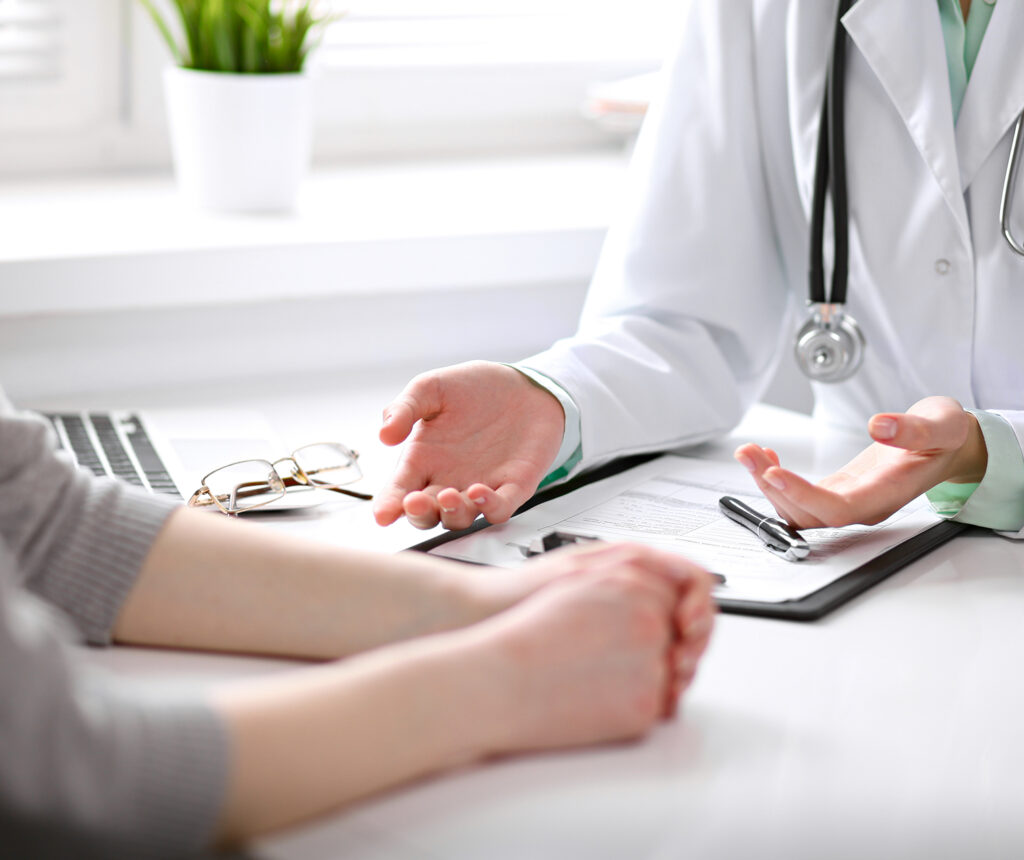 How can Neuropharmagen® help in your clinical practice?

For those patients who have already undergone one or even several unsuccessful courses of treatment, or whose response to medication was lower than expected, the likelihood of a quick selection of an effective course increases.

Increase the credibility of the treatment, because the right treatment is better tolerated by patients

Get recommendations on dosage specifically for a specific patient, depending on their genotype, as well as information on pharmacological safety, identifying the risks of certain adverse effects in advance.

How does our test differ from other pharmacogenetic tests? 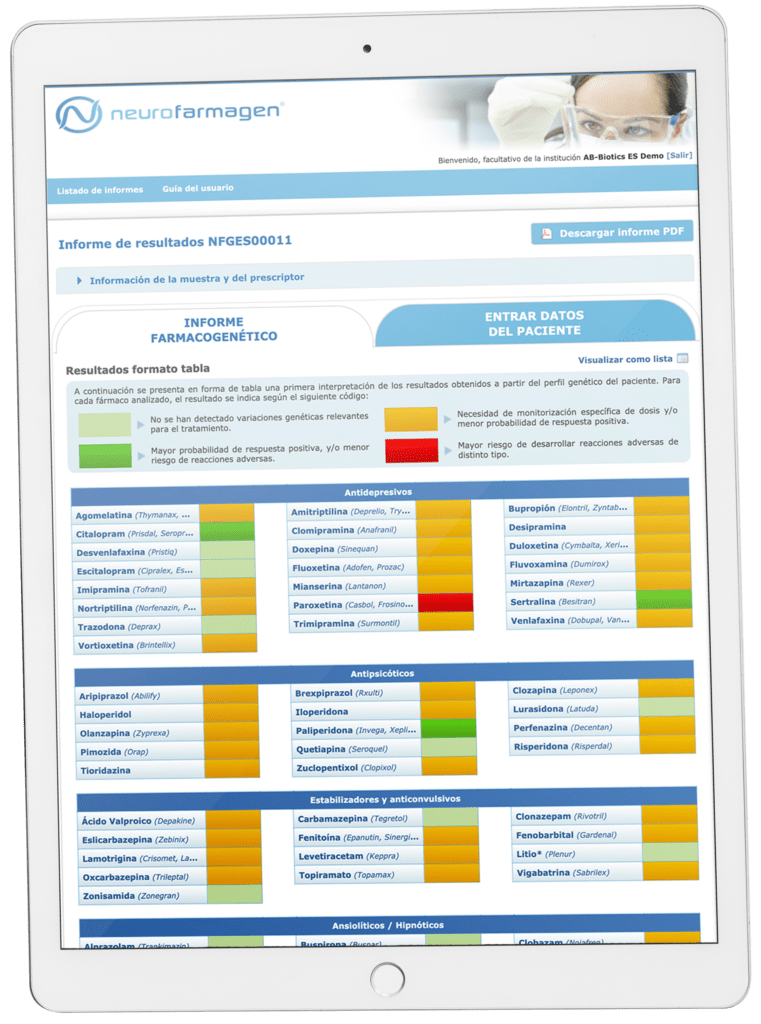 Ease of interpretation of results, clarity and simplicity of recommendations

View an example of an extract

Learn more about the ACCE model

Do you want to try Neuropharmagen® ?

Send a request to receive a trial set*

*Consult with us about the conditions of trial use of the test. 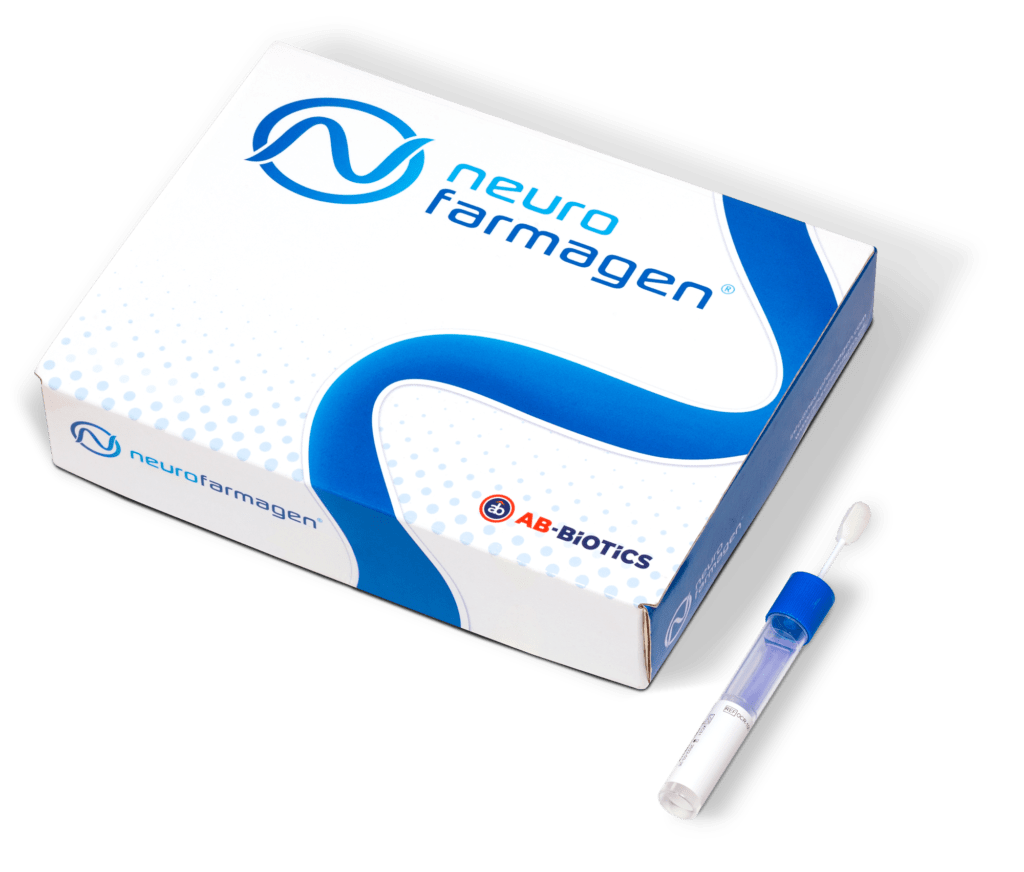 Summary of Data on Clinical Trials

The clinical benefit of Neuropharmagen® has been evaluated in several clinical studies that have been published in reputable journals edited by experts. In fact, this is a unique pharmacogenetic test in the field of psychiatry, supported by sufficiently in-depth clinical studies.

Moreover, we continue to rely on personalized medicine in psychiatry, and clinical studies on new pathologies are currently being conducted.

Check out the research results:

The largest randomized clinical trial (RCT) conducted to date using a pharmacogenetic test in patients with major depressive disorder in 18 hospitals in Spain.

Developed to evaluate the effectiveness of Neurofarmagen in the choice of pharmacological treatment, with improvement measured by the Patient Global Impression of Improvement (PGI-I) scale.

The main purpose: The basic study variable was the number of patients who showed a response to treatment, which was defined as “mild improvement” or “significant improvement” on the Patient Global Impression of Improvement (PGI-I) scale. Minor variables such as the Hamilton Depression Rating Scale (HDRS-17) or FIBSER (Frequency, Intensity, Burden of Side Effects Rating) were also analyzed to assess treatment tolerability. 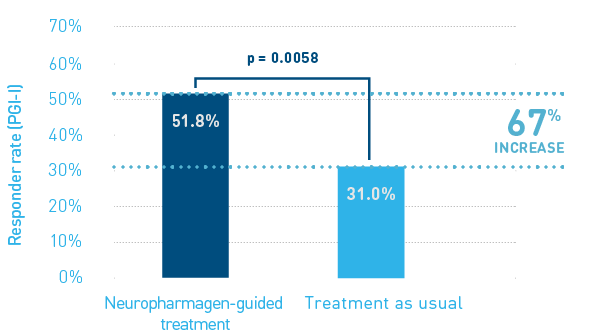 The response rate to treatment increased significantly after 12 weeks in patients treated according to the recommendations of the Neurofarmagen® test, compared with patients who received conventional treatment (control group). 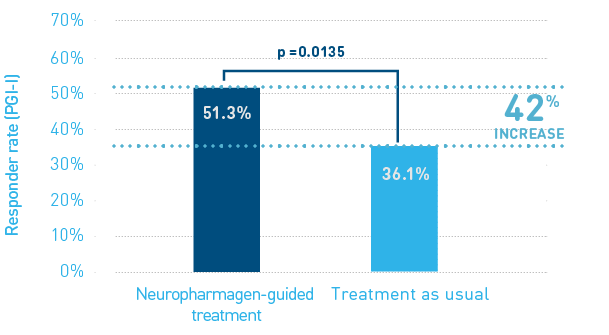 The burden of adverse effects decreased significantly among patients who were treated according to the recommendations of the Neurofarmagen® test, compared with patients who received conventional treatment. 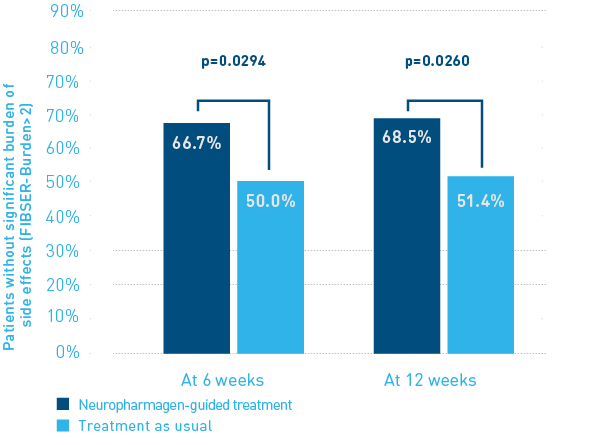 54% reduction in burden
of adverse effects in 12 weeks
View this article
Retrospective analysis of the AB-GEN study: Clinical Benefits of Psychiatric Pharmacogenetics in the Treatment of Patients based on their Genetic Characteristics

This is an analysis of clinical data obtained in a randomized clinical trial AB-GEN (retrospective analysis) to assess the clinical benefit of drug therapy based on the recommendations of the Neuropharmagen® test in certain subgroups of patients by age, basic severity and duration of depressive episodes.

The core target: To study the impact of factors considered to be determinants of clinical response to antidepressants (such as age, main severity, and duration of a depressive episode) on the clinical benefit of Neurofarmagen®. The end points considered were PGI-I response rates (rate ≤ 2), change in HDRS rates, and HDRS response (change ≥ 50%).

Objects:  the study group was described in the basic publication of the results of the AB-GEN study [1]. The following subgroups of patients were examined in this data analysis: Age (< 60 years; 60 years and more), main severity (HDRS main score < 18; HDRS baseline score ≥ 18; HDRS main score ≥ 25); time since diagnosis (up to 1 year; up to 5 years; more than 5 years).

Results: Treatment based on recommendations in accordance with the PGx pharmacogenetic technology produced a significant improvement in response rates in middle-aged patients compared with the conventional group (under 60 years of age; obtained the same results with a cutoff of < 65 years), in patients with moderate and severe depression, in patients with a diagnosis time of up to 1 and up to 5 years. The subgroups in the analysis were reasonably adjusted to the general data in terms of demographic and clinical indicators, with the even distribution of the number of patients between the PGx group and the treatment as usual group (TAU).

The use of Neuropharmagen® helped to improve the indicators response to therapy in middle-aged patients with moderate to severe depression, as well as in patients with the diagnosis up to 5 years ago. 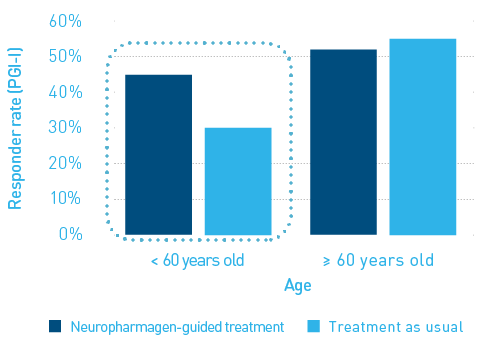 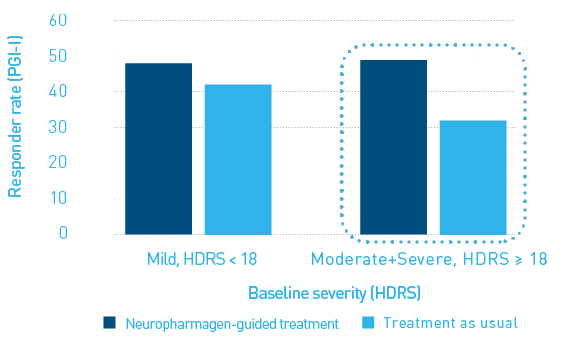 Design: Observational, naturalistic, universal, multicentre, retrospective study. All patients were initially prescribed medication according to standard medical protocols, and the Neurofarmagen® test was performed on all the patients.

Main purpose: To determine the association of a pharmacogenetic profile (as determined by Neuropharmagen®)with changes in the clinical performance over 3 months by comparing patients treated based on test results and patients treated independently of test results. Change in clinical performance was measured by the Clinical Global Impressions – Severity scale (CGI-S). Stabilization was taken as CGI-S ≤3 for 3 months. 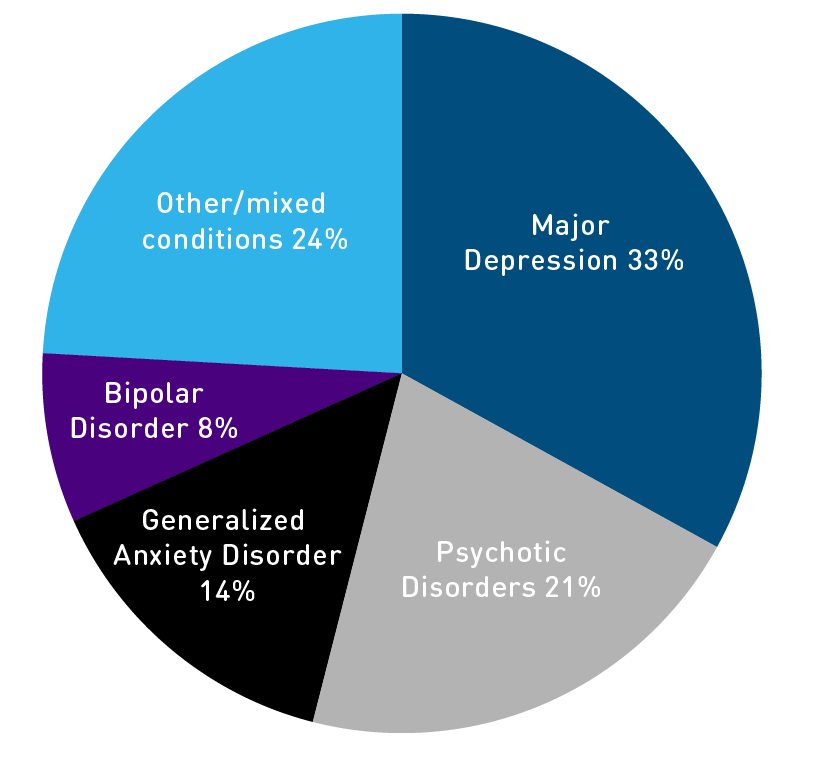 Patients:  191 DSM-IV emotional and psychotic patients with previous treatment failure with a CGI-S assessment ≥ 3 (92% had a CGI-S assessment ≥ 4) at baseline and with detailed information about their therapy mode included to analysis (see STROBE2007 compatible patient movement below).

The use of Neuropharmagen@ helped to reduce the percentage of non-stabilized patients by 40% compared to patients who were treated in accordance with the traditional course, regardless of the psychiatric diagnosis. 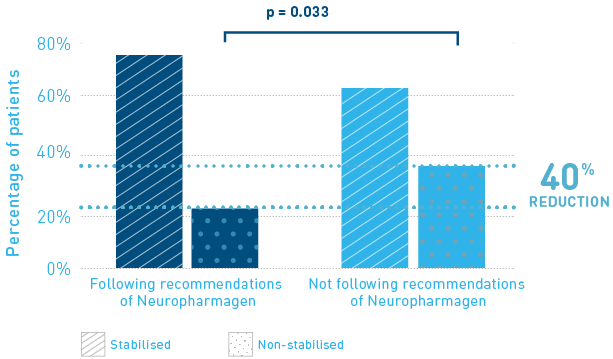 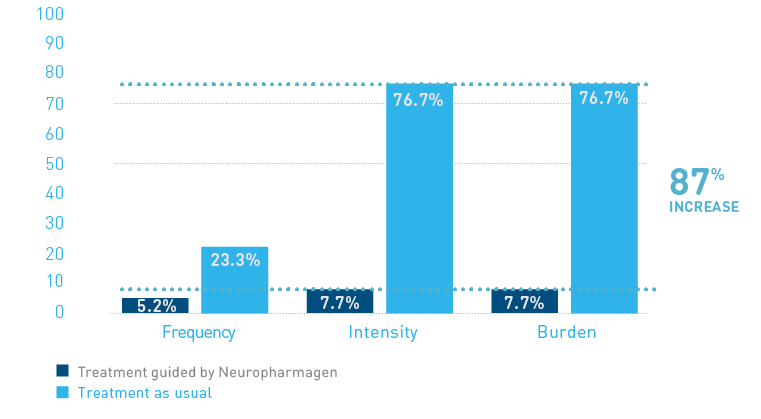 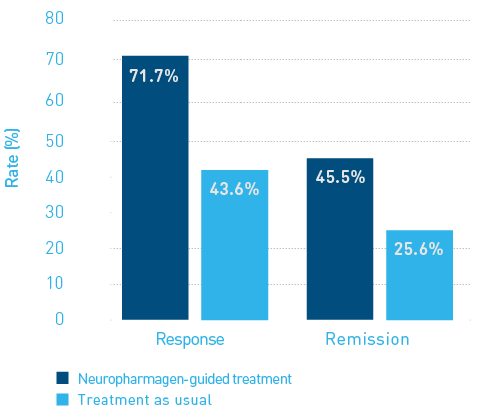 A meta-analysis of clinical trials has been performed investigating the effectiveness of Neuropharmagen® in improving the condition of adult patients with major depressive disorder.

Design: A total of 450 selected patients were examined in three clinical studies. A meta-analysis of random effects was performed. Standardized mean differences (SMDs) and their respective 95% confidence intervals were calculated from clinical data (change in CGI-S and HDRS-17 scores) for each individual study as well as data combinations. Odds ratios (ORs) were estimated based on standardized differences in the analyzed continuous variables (change in CGI-S and HDRS-17 scores) using the logical approximation method developed by Hasselblad and Hedges.

Results: A random effects model estimated the statistically significant magnitude of effects for a course of treatment based on pharmacogenetics (d = 0.34, 95% CI = 0.11-0.56, p -value = 0.004), which corresponded to an approximate increase in the chances of obtaining a clinical response by 1.8 times with the selection of medicines based on pharmacogenetics compared with its unavailability. After excluding patients with mild depression, the cumulative estimated effect size increased to 0.42 (95% CI = 0.19–0.65, p-value = 0.004, n = 287), with OR = 2.14 (95% CI = 1.40-3.27). These results reinforce the clinical utility of this pharmacogenetic tool in improving the health status of patients with depression, especially those with moderate to severe depression.

Design:A retrospective study of groups of children and adolescents with severe mental disorders who were treated and received PGx pharmacogenetic testing. The proportion of patients who achieved an improvement in the clinical performance (according to the CGI scale), a decrease in the severity of side effects (according to patients) and a change in the number of prescribed medications has been assessed.

Patients:  20 children and adolescents who applied for Neuropharmagen® pharmacogenetic tests (10 of them lived in charity schools; and 10 in families with parents) and taking several medications. All patients 17 years of age or younger. 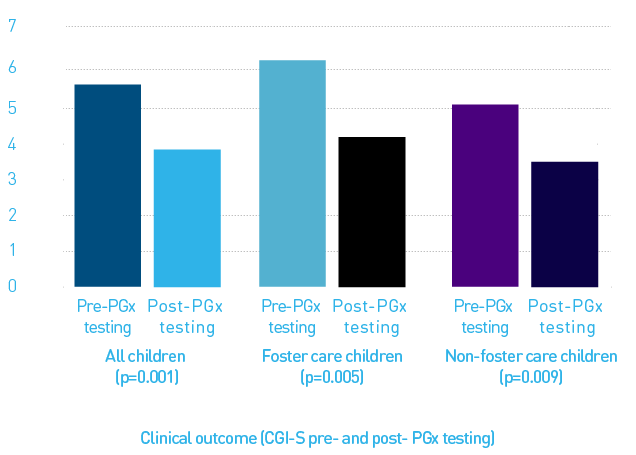 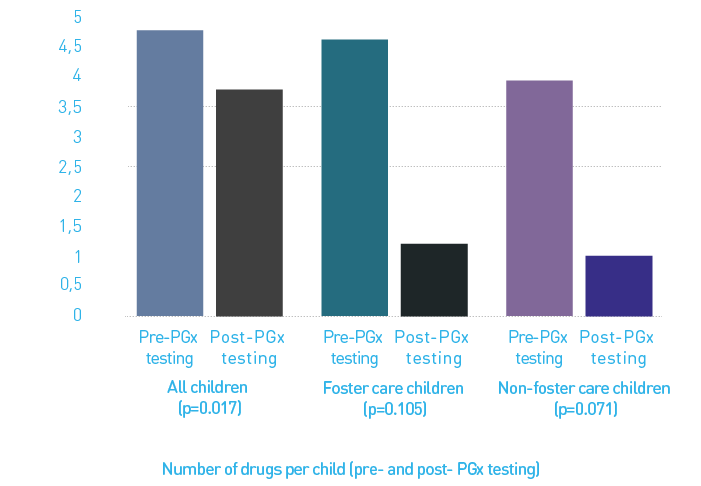 We inform you that we use first- and third-party cookies in order to improve the performance of the page and for analytical and advertising purposes. If you want more information or would like to manage them, please go to the
Cookie Settings.
I ACCEPT COOKIES
WE CARE ABOUT YOUR PRIVACY
You can set your consent preferences and determine how you want your data to be used according to the purposes detailed below.
Uncheck all ACCEPT ALL
These cookies are necessary for the basic operation of the website and, therefore, are always active. They include cookies that remember the actions you make when browsing the website in a single session or, if requested, from session to session. They help in online shopping processes, in addition to providing assistance in security matters and in compliance with regulations.

Analytical cookies allow us to improve the web browsing experience and to provide the administrator with statistical information such as the number of visitors or how users use our platform.

They allow the effective management of advertising space on our website, tailoring advertising content to the content of the requested service or to your use of our website, which are carefully handled either by us or by third-parties. It allows us to find out your browsing habits on the Internet and show advertising related to your browsing profile.

Remember that you can always change your preferences by going to our Cookies Policy
SAVE PREFERENCES
×ATENCIÓ: Cookies no configurades en l'idioma actual. Revisa la teva configuració al plugin, gràcies! 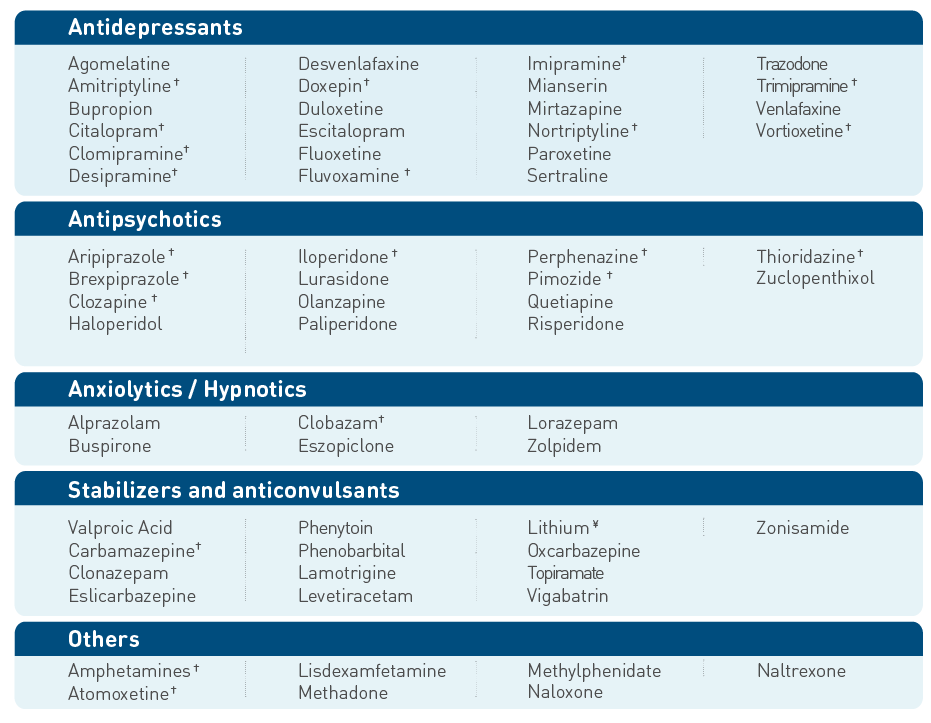 † US Food and Drug Administration (FDA)-approved products with pharmacogenetic recommendations or appropriate warnings about effects due to changes in cytochrome activity in the corresponding technical file. http://www.fda.gov/Drugs/ScienceResearch/ResearchAreas/Pharmacogenetics/ucm083378.htm

¥ According to the Anatomical Therapeutic Chemical Classification System (ATC), lithium is considered an antipsychotic drug (N05AN01). At the special request of the attending physicians and to improve applicability, the designation in the table has been changed and Lithium is listed as a stabilizer.

Would you like to receive a conclusion with the results of the Neurofarmagen test and access to our platform?

Register your contact details with us, we will send you the necessary information

† US Food and Drug Administration (FDA)-approved products with pharmacogenetic recommendations or appropriate warnings about effects due to changes in cytochrome activity in the corresponding technical file. http://www.fda.gov/Drugs/ScienceResearch/ResearchAreas/Pharmacogenetics/ucm083378.htm

¥ According to the Anatomical Therapeutic Chemical Classification System (ATC), lithium is considered an antipsychotic drug (N05AN01). At the special request of the attending physicians and to improve applicability, the designation in the table has been changed and Lithium is listed as a stabilizer.

Would you like to receive a conclusion with the results of the Neurofarmagen test and access to our platform?

Register your contact details with us, we will send you the necessary information